Listen to What JESUS Says 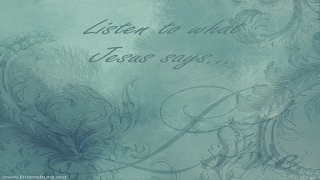 Jesus is the primary voice in the scripture, really among any voices that we have. We're always surrounded every day, and more and more with the technology of today, we're just constantly hearing all kinds of voices telling us all kinds of things, calling us in all different directions, interpreting everything in all these different ways.

In this passage, the emphasis on who to listen to is on Jesus. When God said, "Listen to Him," it can be read with a lot of different inflections, but God said, “This is my chosen one. This is the Messiah. This is my Son.” It wouldn't be very long after this Transfiguration ‘till Christ would give Himself for us at Calvary. And so when John says listen to Him, that's where the emphasis really has to be. Of all the voices that you're going to hear, listen to Him. Understand or follow or connect all the rest of the voices according to what Jesus says.

There's a meme that started circulating on the internet, a cartoon type of sketch of Jesus talking to a bunch of people with their Bibles, and He said, "The difference between us is you interpret love according to the scripture, and I interpret the scripture according to love." I think it's probably circulating among the Methodists right now because of the conversations that we've been having around General Conference and around inclusiveness. Everybody's pretty much kind of having to go to our corners over that way -- which way is the right way to listen to Jesus. Do we listen to Him and interpret everything according to what He said, or do we put it all in a big pool and interpret what He said in the light of everything else in the Bible. Jesus gave us the great commandments that Moses gave and lifted those up as the basis of interpreting all of the scriptures.

In Matthew 22:36-40, when He said, "The greatest commandment is to love God, and the next greatest one is to love one another." And then he said, "On these two commandments hang all the law and the prophets also." That's the Bible.

And often in Jesus' teachings, He would say, "You have heard it said in the Bible," referring to passages in the Bible, and He would say, "But I say this." Or when He was challenged about something, "Why did you do that? The Bible says you can't do that." He never relinquished His authority, even over the scriptures, which we continue to affirm to be His word, the word of God.

If you were reading a book and then you say, "Well I read that book and it means such and such," and you're talking to the author of the book and he says, "Sorry, that's not what it means," who would be right? You would be right that you thought that's what it meant, but the author would be right in what it really meant to the author when they wrote the book. So if you get something out of it differently than that, then the reconciliation has to happen somewhere. That's kind of where we are I think in our Methodist churches. Everybody has to decide where the reconciliation will be. Will it be our opinions? Will it be other views? Will it be other voices in the Bible? Will it be what we hear Moses saying or what we hear Paul saying? Or will it be what we hear Jesus saying?

He said, "If I be lifted up, I will draw people to me." (John 12:32). We put Him first, and His understanding first. Then everything else will fall in place. I think He might have even said that in another way when He said, in the Sermon on the Mount, "Seek ye first the kingdom of God, and His righteousness; and all these things shall be added as well" (Matthew 6:33). The priority, then, is the teaching and example of Jesus. He gave a new commandment as the sign that we are truly His followers, and it was the very thing we're talking about, that we love one another as Christ has loved us.

By that, everybody would know that we're His disciples. And by that discipleship, we would view the world and the scriptures through His way of understanding them. We're His disciples, first and foremost. Whatever else we are, whatever organization we're a member of, whatever church, whatever groups, whatever networks, whatever else that we are a part of, whatever even our national citizenship or the jobs that we have or the hobbies or families or anything else in our life, if Christ is first and His commandment is first, then everything else will fall into place around love. And it will rise, or it will fall, or it will change, most of it will just change. It'll all still be there; it'll just change to conform with the love of God in Jesus Christ. And that changes our witness.

Jesus spoke of being Himself being a witness with his conversation with Nicodemus. He identified himself as the one who came down from heaven and is still in heaven and is sparing testimony to the things that He has already experienced in heaven. A lot of times, we think about Jesus as the one who came from heaven and went back to heaven. He knows the way. When we take Him as the way, the truth, and the life, that's a part of what it means. He'd been there, 'cause that's where He came from, and that's where He went back to, and that's where He's taking us all. And He alone knows the way.

A lot of other people claim that their way is better than His way, and everybody has the right to weigh these out and choose, but Christ invites us to follow Him and His way, the way of love, the way of His teachings, and His example of forgiveness and acceptance and love and mercy and healing. And all of that's born out in the transfiguration, where they were on earth, and they were in heaven all at the same time. And they were visible to each other, the people on earth and the people in heaven. Not just the ones that had died, not just Moses, or not just the one that had been taken up in a fiery chariot and didn't die but went to heaven, Elijah. Not the one that came down from heaven and was in heaven, Jesus, but also Peter, James, and John who had not died, they had not been taken away in a fiery chariot, but there they were on the mountaintop with the others. And that's why we refer to our mountaintop experiences.

I had one on this day 41 years ago at 4:30 in the afternoon. And I felt completely overwhelmed and enveloped in the love of God, inside and out. And ever since by faith, I saw that stream, God flowing [inaudible 00:08:45] supply, redeeming love has been my thing and will be until I die. And that's what God wants for us. He wants us to dwell in [inaudible 00:08:54], living on the mountaintop. He wants that for us. He wants us to feel like shouting even if we don't want to, but feel like it. He wants us to walk around with joy in our hearts and smiles on our faces, with our mind free and filled with a peace that passes understanding and joy unspeakable, and full of glory. He wants us to see the angels ascending and descending. He wants us to have all the visions and all the glory and all the happiness and joy of heaven right here and now. At least what we can handle of it.

And he wants us to handle a little bit more every day, and we just step into it. Take it as it comes and walk into it one step at a time and little by little, joy by joy, [inaudible 00:09:37], precept upon precept. Or as one of our hymns says, "Change from glory into glory, till in heaven we take our place, till we cast our crowns before thee, lost in wonder, love, and praise." (Charles Wesley, Love Divine AllLoves Excelling).

That's our witness. Then when we are filled with that joy, that's our witness. When we feel Christ living in our hearts and walking among us and empowering us, that's our witness. As we ascend to where Christ has already ascended and invites us and is preparing a place for us, and I will come again, bring you with me. That's not just like later, that's now. We're on our way now. And a bunch of our songs. We do that song, but I'm gonna try to remember another song right now. We have so many hymns to go to. It's about our relationship with God, with each other, with the world around us.

From the cross, Jesus said, "Father forgive them." (Luke 23:34). That's our bearing that even under the harshest treatment we love. That's our choice, to respond in love. That's His spirit moving within us to make us feel that way, make us want to do that. The spirit that empowered Jesus to rise from the dead, Paul said, is the same spirit that is in you, quickening your immortal body, empowering you to love as Christ has loved, empowering us with these spiritual gifts that we might serve and enjoy and minister to one another through these gifts and to the world around us.

So I close with my favorite verse from 1 John 4:7-8. "Beloved, let us love one another, for love is of God, and everyone who loves is born of God and knows God. Those who do not love do not love God, for God is love."

Transcript of the sermon preached extemporaneously at Briensburg UMC on March 3, 2019.