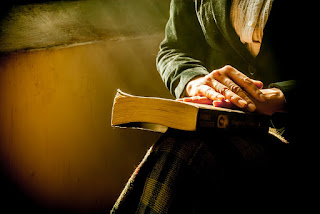 But these have been written in order that you may believe that Jesus is the Messiah, the Son of God, and that through your faith in him you may have life. (John 20:31 GNT)


Transcript of the [audio for this sermon] preached extemporaneously
at Briensburg UMC on April 28, 2019.

This passage of scripture begins to take place on the evening of the resurrection when Jesus appeared to ten of His disciples behind closed doors, then it continues the next Sunday when eleven were there, when Thomas was there.

And Thomas always gets kind of the brunt on this. I guess they picked on him about this through the years, because he didn't believe everybody's story. But really a lot of other people have that problem too, including the other people that were poking fun at him about not believing.

His authority was challenged by many of the religious leaders when He would say to people, "Your sins are forgiven," and they would say, "Well who are you to forgive sins?" A lot of times He would heal people as a sign, not only of His love for them and His caring about their condition, but as a sign that their sins were forgiven.

That's an important part of our whole faith, the heart of the gospel message. The forgiveness of sins. That we don't hold things against each other, that we have tolerance for one another. If you think of a machine, sometimes call that forgiving, whether it be a vehicle or some kind of equipment or something, you say, "This is forgiving."

You don't mean that you confess your sins to it and it forgave you of those sins. You mean in a broader sense, it doesn't hold anything against you and it gives you a lot more flexibility and a lot more leeway in what you're doing before you would get hurt by it or hurt something else by it.

And that's the kind of people God invites us to be, people who are forgiving, who are not so rigid that everything we touch and everybody we come against gets hurt by us. But instead, we're like God, we're like Christ in the sense that we don't hold the things against people, but instead we open our lives to each other, embrace each other and love one another as Christ has loved us.

And so when He breathes into us the Holy Spirit, He breathes it with that proclamation. Those whose sins you forgive are forgiven. Those whose sins you do not forgive are not forgiven. You can go either way with this. You have the authority to forgive sins. You have the authority to be a forgiving person. If you're not, you will be.

And if you decide not to use that authority and to not forgive and not be a forgiving person, who do you hurt? You hurt the people who need it the most and you hurt yourself because Jesus still said at the end of the Lord's Prayer, "If you do not forgive the sins of other people, then neither will your Heavenly Father forgive you your sins."

And he still has those parables that demonstrate if you hold other people's sins against them, even those sins that you feel are forgiven can be brought back up against you of your own sins.

The way that you decide how you're gonna hold something against other people is the way God will decide how things will be held against you. That's treading on thin ice when you are not a forgiving person.
The power of the Holy Spirit is the power to love as Christ has loved. In the book of Mark in the 16th chapter when he sent everybody out, he sent them out with all these signs, similar to what Christ had done in His commissions to us and the various ways they're presented in the Bible.

In our prayer times, we're always having the time of unspoken concerns and I ask how many have unspoken concerns. Everybody in this room has things that we don't talk about and name with each other for prayers, but we know that we have those things on our hearts, don't we?

And we know that our family and friends that are not here in this room are included in that same number, those that we'll see when we leave this room and go to other tables and other rooms throughout the week.

And so we need to greet each person that we meet along the way with the same love and forgiveness that Christ greets us with and extend the same love to them that we receive from Christ, and the faith and confidence and the hope that we have in Christ, we need to share that as fully and freely as we share it here in this room with one another.

The world needs Christ. That's what this Bible is all about, pointing us to Christ. Helping us to point each other to the one who loves us, the one that we can trust and follow, one who cares about us, one who empowers us and breathes into us the Holy Spirit.

In the name of Jesus,
Amen.

Transcript of the [audio for this sermon] preached extemporaneously
at Briensburg UMC on April 28, 2019.