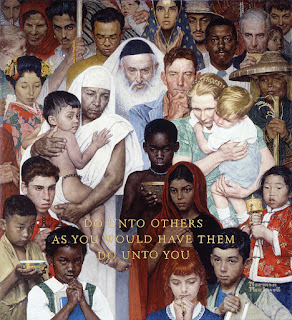 The Golden Rule is our way of resisting evil in all it's forms, even now when racism, discrimination and exploitation are so popular.

"Do for others what you want them to do for you. This is the meaning of the law of Moses and of the teaching of the prophets."  Matthew 7:12 (GNT)

Jesus taught the Golden Rule and commented on it in this verse in a way that puts it on par with the great commandment of Moses. When He was asked what is the greatest of all commandments, Jesus said, "The greatest is this, to love the Lord your God with all your heart and mind and strength and soul. And the second is like unto it, thou shalt love your neighbor as yourself." And then He commented on that commandment almost the same words He says here, "On these two commandments hang all the law and the prophets also." Matthew 22:36-40.

Transcript of the [audio for this sermon] preached extemporaneously
at Briensburg UMC on July 21, 2019.

Even anybody as bad as sometimes we are, as messed up sometimes as we get, still if a child asked us for a loaf of bread, we wouldn't give them a stone. Or if they asked us for an egg, we wouldn't give them a scorpion. And He said even more think about how your heavenly Father wants to give good things, right on top of all this about the providence of God which He's already pointed out is for everybody. "He makes it to rain on the just and the unjust." Now He places this Golden Rule.

Which Norman Rockwell has depicted here as our landmark that we want to use today, the painting by that name where right in the middle of the painting he wrote "Do unto others as you would have them do unto you." The Golden Rule is universal. It's for us to apply in every situation in our lives. This is the ethos of our faith. It's a call to empathy at it's most complete levels. In every situation, in every relationship, you want to be helpful to people and not hurtful. And that applies to every person that you know. Even Jesus was talking about that's why it's so important to connect that with the rest of the Sermon on the Mount because he said even to your worst enemy, "Do good to those that revile you. Pray for those that persecute you."

This is our way of resisting the evil around us by doing good. This is our way of pushing back against the people that are pushing from the other way. We push back by loving them as Christ has loved us. We push back by standing firm in our faith and belief in the teachings of Jesus and implementing them in each situation. So it's universal in that sense, but it's universal in the sense that it's for everybody to do. It's for everybody in every situation. It's for all the other people for us to encourage that in others too regardless of what their beliefs or practice may be regarding religion or spirituality. This is for us to teach everyone, encouraging everyone. 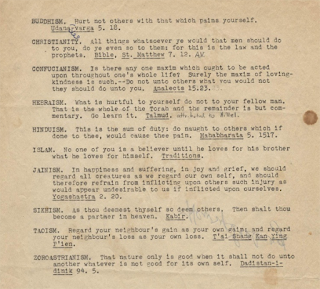 This is a picture of a piece of paper that Norman Rockwell typed up as part of his preparation for painting this picture. One thing was to take a piece of paper and type up on there and do a little bit of research and find out what all these different other religions said in the core of their teachings that was similar to this. It's really the Golden Rule phrased differently by these other different religions. It's a universal teaching. The whole faith community comes together around this apex of all of our teachings. And however we may understand anything else that we talk about or sing about or pray about or argue about anything else, in whatever religion we have this is the goal of spirituality. This is the high point of spirituality.

The Golden Rule is a universal rule for all humanity regardless of what else we think or do or believe about anything. The Golden Rule is collectively applied as well as individually, implementing the teachings of Christ. It's to be implemented even in our groups. And many times when we think about the judgment of Christ and think of the great white throne judgment and we all picture there like we're all standing in line waiting our turn, the books are open, each one of us individually judged according to the things that are written in that book. But in Matthew 25 when Jesus talks about dividing the sheep from the goats, He speaks of that as the judgment of the nations. That's pretty inclusive of everybody as a group. What we do as that two or three when we gather together, what we decide, the Golden Rule still applies.

What we do as a congregation, as a community, as government entities, as state and national organizations, worldwide. Everything that we do no matter who we're doing it with it still stands under this judgment of almighty God. And we have our place in that. So we have our responsibility to that. What we may be able to do might not be very big. Might be like the people that were given little investments by the guy that went on a journey in the Bible. And the one guy didn't have very much so he thought he would just bury his talent while the other two invested theirs. And when the master came back, found out that wasn't the right way to do it.

We may only be able to pray. We may be only to say a word here or there or do something, we may not be able to do much. Remember back when they restored the Statue of Liberty, they did that with pennies. And now the politicians, who are they going after? Saw this on the news or on your email? Those little one dollar, five dollar donations because a whole bunch of small things adds up to a whole lot more than a few big things. We're called to apply the Golden Rule collectively as well as individually.

And then in our church we have this general rule, "Three General Rules," that date back to before the Methodists were called Methodists. When they were just kind of meeting and talking about and they had these rules about how to implement the teachings of Christ systematically, methodically in our personal lives, in our group lives, how we can group together, in our church life or in our political life.

And rule number one, "Do no harm." Think about that in relation to the Golden Rule. If you don't want anybody harming you, don't harm other people. And number two then, "Do good." Do the kind of good to others that you hope others will do to you. And "Stay in love with God." Use the means of grace and make them available to each other, emphasize them, see Christ in each other. Do the best we can for each other. Share the sacraments of the church with the community.

So the Golden Rule is not like orders from headquarters or just something to debate and discuss as an interesting idea or a philosophy to consider. The Golden Rule is an invitation. An invitation to join Jesus and the other spiritual masters of faith through the ages. To do as Paul said, "sit in the heavenly places with Christ."  The Golden Rule is our pathway to the heavenly places, to the ultimate goals that we feel in our hearts and minds about what spirituality is for. As we practice and implement the Golden Rule, we go up a few notches. And when we don't, we go down a few notches in our faith journey, in our own spiritual lives. And we take everybody around us with us either way.

Christ brings us this great invitation, this great opportunity to practice and to implement and to share and to call others to join us. In doing unto others as we would have others do unto us.

In the name of Jesus, Amen.
Posted by Bill Lawson at 5:15 PM