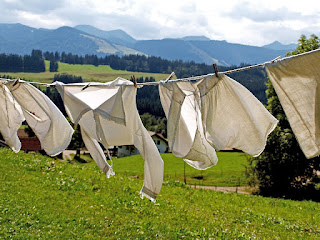 Our ability to love and serve comes from our relationship with Christ.
For as many of you as have been baptized into Christ have put on Christ. (Galatians 3:27 KJV)

That's how it's written in the King James Version. And the Good News Translation says, "You were baptized into union with Christ, and now you are clothed, so to speak, with the life of Christ himself." (Galatians 3:27 GNT)

There are many other Biblical examples of the imagery "clothed" as a figure for being wrapped or dressed. The opening of our funeral liturgy includes the affirmation, "As in baptism [we] put on Christ, so now may [we] be clothed in glory." Clothed in Christ imagery is written by Paul here in Galatians and also in Romans, and the idea of being clothed in glory is highlighted throughout the Book of Revelation.

Transcript of the sermon preached on June 19, 2022, at Briensburg UMC | [Audio Podcast]

The idea being represented, then, is that our new life and opportunities and abilities come from God working within us and among us to empower us by the Holy Spirit, to love others as Christ loves us, and to effectively minister our spiritual gifts to each other and to the world. In his 1834 hymn "Solid Rock," Edward Mote prayed,

When [Christ] shall come with trumpet sound
O may I then in him be found:
dressed in his righteousness alone,
faultless to stand before the throne.

Union with Christ brings us into a covenantal union with each other in ministry to the world. In our United Methodist Baptismal Covenant, in response to the query of the whole Church,

Christ casts out our demons, whatever they may be, and puts us in the right frame of mind

Then they went out to see what was done; and came to Jesus, and found the man, out of whom the devils were departed, sitting at the feet of Jesus, clothed, and in his right mind: and they were afraid.    (Luke 8:35 KJV)

In the Gospel reading today, we find that Christ casts out our demons, whatever they may be, and puts us in the right frame of mind. "Then they went out to see what was done; and came to Jesus, and found the man, out of whom the devils were departed, sitting at the feet of Jesus, clothed, and in his right mind: and they were afraid.    (Luke 8:35 KJV). Clothed, once again, is the word used in both Gospels of Luke and Matthew. The story is actually told also in the Gospel of Matthew, Mark, and Luke. But in two of those, Mark and Luke specifically highlight that the redeemed person was clothed. And both also noted that this newly transformed believer was in his right mind and that he went home and told everyone in his community about the great things God had done for him.

The mind of Christ. "Let this mind be in you which was also in Christ Jesus" (Philippians 2:5 KJV). Paul encouraged. He also encourages in his other letters that he wasn't ashamed of this gospel because it was not a gospel of fear but a gospel of love and a sound mind and power. (Romans 1:16; 2 Timothy 1:7). The love of Christ, as Paul points out, is shed abroad in our hearts (Romans 5:5).

I like this old song, "Give Me That Old Time Religion:"

And it has this other verse,

And the state of mind of this newly clothed person sitting at Jesus' feet is expressed in another old-time song I always liked. It's the hymn Bernie Elliott Warren wrote, Joy Unspeakable and Full of Glory, and it has a verse that says,

I have found His grace is all complete;
He supplieth every need.
While I sit and learn at Jesus’ feet,
I am free, yes, free indeed.

For he hath not despised nor abhorred the affliction of the afflicted; neither hath he hid his face from him; but when he cried unto him, he heard.      (Psalm 22:24 KJV)

The Psalmist in today's readings was just getting ready and warmed up for our favorite Psalm 23. In Psalm 22 verse 24, it says, "For he hath not despised nor abhorred the affliction of the afflicted. Neither hath he hid his face from him, but when he cried unto him, he heard." That's good news all by itself, isn't it? If that's all, there was in there. In the Good News Translation, that verse reads, "He does not neglect the poor or ignore their suffering; he does not turn away from them, but answers when they call for help" (Psalm 22:24 GNT).

In Matthew 25, Jesus said, "I was naked, and you clothed me. In as much as you did it unto the least of these, you did it to me."

God is in the gentle, firm, persistent Voice of Love

And then finally got the gentle, firm, persistent voice of love. In 1 Kings 19:12, "And after the earthquake a fire, but the Lord was not in the fire. And after the fire, a still small voice." The wind, earthquake, and fire grab the headlines and get the attention. Big fanfares and boisterous flamboyancy attract everyone and divert the energy. Elijah had plenty of these larger-than-life miracles in the Bible accounts of his prophetic ministry, calling down fire to consume the false prophets along with their altars, passing his mantle to Elisha as he was being carried off into heaven in a fiery chariot, and many other places.

And in this passage here, we even heard today, that tells about a few more, but with an important twist in the plot, after the mountains shook and the wind and earthquake and fire had all passed by. We even use the figure of speech "acts of God" to describe huge disasters, but God is not in the disaster. God is in the response, in the recovery, in the healing. But God is in the voice, the still small voice. "Still," according to the Hebrew Lexicon, comes from the word that actually literally means "a whisper, calm. silence." "Small by that same lexicon's definition points to "thin, small, fine." And the voice. The voice. Listen. Listen as the voice speaks to your heart and mind. The voice of the Almighty.

At the baptism of Jesus and his transfiguration, a voice was heard saying, "This is my beloved son in whom I'm well pleased. Hear him." (Matthew 3:17, 17:5). God speaks to our hearts and minds through the scripture and through our spiritual conversations, through prayers and sermons and hymns. God speaks to our souls with clear impressions, inviting and encouraging, comforting and challenging, calling us together and sending us forth into the community.

The hymn by G.W. Briggs has three verses. They each start out this way... One verse starts out, "God has spoken by the prophets." The second verse starts out, "God hath spoken by Christ Jesus," and the third verse, "God yet speaketh by the Spirit." Listen. Hear. Respond to the still small voice that calls us and encourages us and invites us to unity with Christ and humanity and creation. To be clothed in a new, fresh right mind. To be the proverbial hands and feet of Jesus, loving as Jesus loves, speaking words of grace and mercy and hope, embracing a suffering world with healing and kindness.

In the name of Jesus. Amen.