In the Sight of the Lord 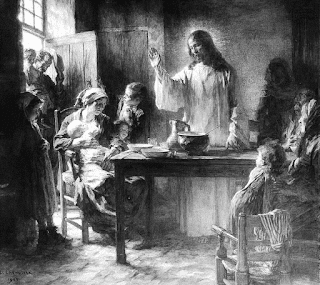 God sees us and knows us as we are and loves us.

We need to be mindful of both our strengths and our weaknesses.

The Parable of the Wedding Feast is partly a warning, partly a teaching, and partly a promise. Proverbs 16:18 says, “Pride goeth before destruction, and an haughty spirit before a fall.” Clint Eastwood’s character Dirty Harry in “Magnum Force” expressed it as, “A man’s got to know his limitations.” We do not need to believe those who preach the total depravity and complete moral bankruptcy of humanity, but we do need to be cognizant of our frailties.

Manuscript of the sermon preached on August 28, 2022, at Briensburg UMC   [Audio Podcast]

The parable is partly a teaching. The Apostle James wrote,” Humble yourselves in the sight of the Lord, and he shall lift you up.” (James 4:10 KJV) Christian humbleness is more about how God views us than how we are viewed by others. God views us as good. We have been created in the image of God. We have been created as companions with our Creator. From Genesis to Revelation, God wants to be in fellowship with us. More than that, we, like Abraham, were created to be friends with God, as Jesus assures us in John 15:15.

Yet we are in need of redemption (and, thankfully, redeemable). God continues to send “rain on the just and the unjust” (Matthew 5:45 KJV). God sent Jesus to be our savior, and not just our savior but the savior of the whole world, as we frequently affirm in John 3:16-17. God sent the Holy Spirit to guide us into all truth.

Seeing ourselves clearly and accurately is an important part of the love being perfected in us. As Paul describes in 1 Corinthians 13, Good News Translation, “What we see now is like a dim image in a mirror; then we shall see face-to-face” (1 Corinthians 13:12 GNT). James went on in his letter to instruct, “Confess your faults one to another, and pray one for another, that ye may be healed” (James 5:16 KJV).

Borrowing a phrase we hear on the news a lot lately, “settled precedent” says, “all have sinned, and come short of the glory of God” (Romans 3:23 KJV). We’re not feeding the gossip mill and certainly not confessing each other’s sins. We don’t need to hear each other’s juicy details, but we do need to share a general realization and confession that, as the saying goes, “the ground is level at the foot of the cross” where we all stand in need of healing and salvation in all its forms.

The parable is partly a promise – an amazingly great, eternal promise. Perhaps the most profound imagery of what Jesus was promising in this passage is found in Paul’s letter to the Philippians, where he proposes that we do like Jesus did:

Let this mind be in you, which was also in Christ Jesus: Who, being in the form of God, thought it not robbery to be equal with God: But made himself of no reputation, and took upon him the form of a servant, and was made in the likeness of men: And being found in fashion as a man, he humbled himself, and became obedient unto death, even the death of the cross. Wherefore God also hath highly exalted him, and given him a name which is above every name: That at the name of Jesus every knee should bow, of things in heaven, and things in earth, and things under the earth; And that every tongue should confess that Jesus Christ is Lord, to the glory of God the Father. (Philippians 2:5-11 KJV).

Peter Scholtes wrote in his song:

We are encouraged to maintain a right relationship with each other.

For better it is that it be said unto thee, Come up hither; than that thou shouldest be put lower in the presence of the prince whom thine eyes have seen.    (Proverbs 25:7 KJV)

It’s better to be promoted to a place of honor than face humiliation by being demoted.     (Proverbs 25:7 MSG)

This same principle Solomon highlighted in his Proverbs is what Jesus was talking about in the Gospel of Luke. Paul reminds us in Romans to not think more highly of ourselves than we “ought” (Romans 12:2 KJV). We don’t need to think more lowly of ourselves either. We need to examine ourselves honestly in the presence of God and discover more about who we really are, so we can know what improvements we need to make in how we relate to God and our fellow creatures.

Jesus told a parable of a man who “returned home justified” after praying humbly to God, as opposed to another who missed that reward because he only prayed self-righteously about how wonderful he was in comparison. There Jesus repeated what he had said earlier in today’s Lectionary reading, “for everyone one that exalteth himself shall be abased, and he that humbleth himself shall be exalted. (Luke 18:14 KJV)

Jesus was concerned most about how people treated each other.

Unto the upright there ariseth light in the darkness: he is gracious, and full of compassion, and righteous.     (Psalm 112:4 KJV)

Light shines in the darkness for good people, for those who are merciful, kind, and just. (Psalm 112:4 GNT)

This promise of a guiding light is universal, regardless of where a person is on their spiritual journey or relationship with God or what path they have taken to where they have so far arrived. Some would argue this only applies to those who have met some religious prerequisites specified by their particular sect. The example of Jesus demonstrated the opposite. Those who were “good people” in the sight of Jesus often were viewed as “bad people” in the sight of those who considered themselves to be the most religious and righteous. These will “go into the kingdom of God before you,” Jesus told the Pharisees (Matthew 21:31) -- not instead, but before.

In Matthew 25, the Judgement of the Nations is based on how they treated the most vulnerable among their populations, “inasmuch as ye have done it unto one of the least of these my brethren, ye have done it unto me” (Matthew 24:40). After a scathing rebuke of much of what we do in church, in an oracle that has been phrased in a variety of very pointed ways through the centuries, the prophet Amos preached, “But let justice roll down like water and righteousness like an ever-flowing stream” (Amos 5:24 NRSVUE).

We are invited to cultivate an attitude of mercy, not sacrifice

But to do good and to communicate forget not: for with such sacrifices God is well pleased. (Hebrews 13:16 KJV)

Do not forget to do good and to help one another, because these are the sacrifices that please God.     (Hebrews 13:16 GNT)

When Jesus was criticized for including forgiveness along with healing and for eating with sinners, he referenced the oracle delivered by the prophet Hosea (Hosea 2:6) and said, “But go ye and learn what that meaneth, I will have mercy, and not sacrifice: for I am not come to call the righteous, but sinners to repentance” (Matthew 9:13 KJV).

Historically, superstitious humanity seems to always have felt a need to appease an imaginary, tyrannical cosmic diety with all manner of sacrifices. Even though modern humanity mostly rejects blood sacrifices, we still have a compulsion to think of service to God and each other as the sacrifices of wretched creatures such as Jonathan Edwards imagined in his sermon “Sinners in the Hands of an Angry God.” But if we think of justice and kindness as love offerings to the God who loves us unconditionally from eternity to eternity, the drudgery of appeasement is transformed into the joy of salvation and healing.

We’ve been studying the prophet Micah in our Wednesday evening Bible Study. The tone of the book is largely gloom and doom. Micah’s contemporaries chastised him for prophesying against them, especially in such vivid and foreboding terms. But this week’s chapter includes the famous verse that stands out right in the middle of all the intense tragedies described. It is the verse that clearly summarizes what God expects of humanity. The verse is preceded by asking what kind of sacrifices we could make that would be pleasing to God. Would it be burnt offerings, or calves, or rams? Would it be “ten thousands of rivers of oil?” What if we sacrificed our children? These are the kinds of things people used to think they had to do to please God. Perhaps many have replaced those gruesome ancient sacrifices with more palatable modern counterparts. But Micah proclaims, in the Good News Translation,

No, the Lord has told us what is good. What he requires of us is this: to do what is just, to show constant love, and to live in humble fellowship with our God. (Micah 6:8 GNT).

In the Name of Jesus, Amen.