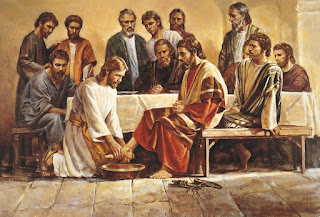 
I've had the privilege of being involved in different kinds of worship services throughout my life, different contexts, different churches, different denominations, different ways of doing the symbolic foot washing service.

When the Bible tells us about Jesus doing this foot washing, He said that He was setting this as an example of the kind of relationship we're supposed to have with each other, and the world around us.
In John's gospel, it's the bigger part of the Communion Service. In John's gospel, he just mentions that they had the bread and the wine as they had their Passover meal, and then he elaborates on this part of the service they share. The foot washing part of their experience.

[Listen to the audio for this sermon]
preached extemporaneously at Briensburg UMC on September 22, 2019.

For many people, the Gospel, and everything that Jesus did gets marginalized somehow as something that's unattainable. Something that was only to make us look bad, only to show how good that God is. And it does show that, but that's not all it is. Sometimes we have a tendency to think, "Well, Jesus did that, but I can't. I'm not even supposed to try."

But Jesus said He was doing this as an example of what He wants us to do, and expects us to do as His followers. I would like to reflect today on one of the meaningful foot washing services I have participated in, and as you share that reflection, perhaps it will touch you as it touched me.

Several decades ago, many more than several, but forty years ago I had the privilege of living for a couple years on the family farm in Tennessee where my father's mother grew up. Her father had three jobs there. My Great Grandfather was a blacksmith in the community, and he was a fireman on the railroad, and he was a preacher. So I got to meet some of the people who were my Grandparent's age who still remembered my Great Grandfather. They told me stories about him and everything, and so that was pretty neat! To live in that community and to worship sometimes with the people that my Great Grandfather, and my Grandmother, and my Grandparents worshiped with.

As we gather for Communion after the meal and after a lot of singing and a lot of preaching. Then we shared the bread and wine, and then the way they did it was everybody separated, the men to one side and the women to the other for modesty. They passed out basins of water and towels, and then we each took turns getting down on our knees and bathing each other's feet. It's one of the most emotional, spiritual times, experiences of my life. To be with these people that I had learned to respect and love, that we worked side by side with, that we worshiped with, that we struggled with, and we went through things in the community with, and people I looked up to getting down on their knees and washing my feet and I theirs.

Along with the singing came a little shouting and a lot of people hugging each other's necks and weeping in each other's arms. As all this we brought up is that the love and the stresses together and all this washed through the crowd throughout our hearts and minds while we symbolically washed each other's feet.

It's hard to think that you could have that kind of experience with somebody, I mean go outside and not love them even more and then come back together before it all wore off and do it all over again. That's one of the things I love about our time here of passing the peace. When we shake each other's hands, and hug each other, and smile at each other, and talk to each other, and remind each other the love that we share, as Mitch said it that "swells in the room." I love that way you said that in your prayer. So then as we kind of melted back together, all the people back to their places singing some more.

In this Bible passage, the disciples shared that experience in a small group with Jesus being around to wash their feet. You can kind of get a little bit of a sense of that when you think about somebody you look up to, somebody you love, somebody you respect humbling themselves to wash your feet. They got up from that place and then they went outside and they talked and sang as they walked.

They talked about heaven, they talked about love, and they sang hymns the Bible says. They made their way out to where Jesus was being arrested, and giving himself up for us. And Jesus in this room before they left,
He said, "I've done this to set an example for you that what I've been doing, all of it really, symbolized, all these things that I've been doing, all the ways I've been loving you, all the ways I've been showing you God's love, that's what I expect you to do for each other and for the world around you."

And then He gave that commandment. You know, the lectionary reading for today I think talks about when Jesus celebrated the Great Commandment and said the greatest is that you love God and love one another, and on these two commandments saying all the law and the Gospel, and the prophets.

In this law, toward Gethsemane after the foot-washing, Jesus gave His commandment. He said that, "You are to love one another as I have loved you."

Like the song said, "Teach us how to love one another! Lift us to the joy divine!"

So one of the songs that everyone told me was my Great Grandfather's favorite song, then it had become one of my favorites. "Life's Railway to Heaven." It's about keep your hand upon the throttle and your eye upon the rail, and this is the chorus.

"Blessed Savior! Thou wilt guide us!
Till we reach the blissful shore,
Where the angels wait to join us,
in thy praise forever more." 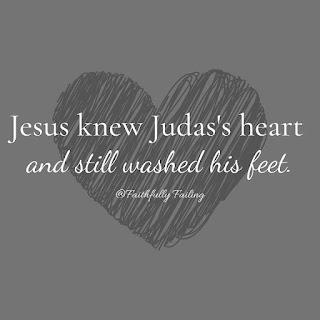 One more thought as we close. Yesterday, I shared a picture on the Internet: "Jesus knew Judas' heart and still washed his feet."