The Sin of the World 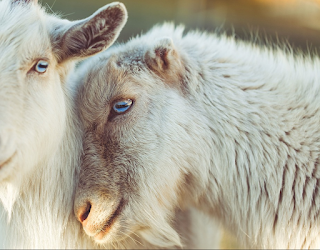 Behold the Lamb of God, which taketh away the sin of the world. John 1:29b

Today is Human Relations Sunday. Next Sunday is Ecumenical Sunday. So in conjunction with all of that, the sin of the world comes up. It affects the relationships that we have with each other, with everybody else in the world.

[Listen to the audio for this sermon]
Preached extemporaneously at Briensburg UMC on January 19, 2020.

We are against sin, right? That is a standard thing as a church. But then there's always a lot of a conversation about what that means. Historically, people have had all different ways of trying to deal with the sin. Because sin itself, the hurt and the pain of that brings people to being at odds with each other and with themselves and with God. So when Jesus stepped onto the scene, began His ministry, He did so as John went up to Him saying, "Behold the Lamb of God."

The Lamb of God had a big significance to the people then as it does to us now. One image and one prophesy that comes to mind was the prophet Isaiah hundreds of years before pointing to that generation of people and everybody in between and then everybody after down to us in this room. When you compare the Messiah, the Savior, the Lamb that was being led passively to its slaughter. Isaiah 53:5 encourages us all to remember that


he was wounded for our transgressions,
he was bruised for our iniquities:
the chastisement of our peace was upon him;
and with his stripes we are healed.

So that's what it means to be the Lamb of God, a gentle, loving creature, passive and docile and yet in the Lamb of God is the power to take away the sins of the world.

There's a lesson there I think the Bible is trying to communicate using that imagery. The world is full of imagery that could have been used besides animals. There are a lot of animals that could have been been used besides the lamb. But throughout the scriptures, Christ is held up as the Lamb. So if we reflect Christ in our lives, then that's one of the the associations we might think of for ourselves, the Lamb spirit, the spirit of the Lamb is our spirit, the spirit working within us, the Lamb of God who takes away the sin of the world.

There were a lot of sacrifices people used to make in hopes of just having the punishment of sin staved off. But when John began preaching and baptizing, he said that he was baptizing for the remission of sins. He was calling on people to come and join together in letting sin recede from our lives and from the world. That became like the focal point of our whole faith, the forgiveness of sins. Christ demonstrated to us His plan of salvation was that sins would be forgiven, that God would forgive our sins and we would forgive each other's sins and we would forgive the sins of the people around us. When we do that, the sin is gone.

One of the beautiful things I think about in our service every week is a moment, a brief moment just to face ourselves honestly. We only really have enough time even when we stretch it out a little bit sometimes to just recognize and affirm that "all have sinned and fallen short of the glory of God," (Paul), the joys that God has for us. We give pause to do that and hopefully in that pause, we encourage each other to take up pauses like that throughout each day because every time, the Bible said,  "if we confess our sins then God is faithful and just to forgive us our sins," and "to lead us into everlasting life" is one of the ways we say it in our rituals. That's what God wants. He doesn't want to hold anything against anybody. He doesn't want us holding anything against each other.

He doesn't want us holding anything against anybody else in the world. He doesn't want them holding anything against us either but other people might need more of an example. We're the ones that can give that as the people of the Lamb, the people of Christ, to extend the forgiveness to everybody around us that Christ offers to us. We often talk about that, about things and about how even from the cross and without anybody confessing their sins there, He still forgave them. He still said, "Father, forgive them. They don't even know what they're doing." They didn't even know, but He still forgave them. That's a challenge for us, to be able to extend proactively our forgiveness and not because it's our right to hold a grudge, but because we are in the business of forgiving sin.

We're in the business of helping people know that their sins are forgiven. We assure them. We offer that assurance of absolution. It's sacramental in our lives to be able to tell somebody that we care about, or strangers, that their sins are forgiven in the name of Jesus, starting with us as a demonstration. But anybody can do that. Anybody can "not hold" anything against somebody else -- or they can hold something against them, but which one is actually the reflection of Christ? And which one do we choose? So "behold the Lamb of God who takes away the sins of the world." Charles Wesley in his hymn ["And Are We Yet Alive"] wrote,

Then let us make our boast
of his redeeming power,
which saves us to the uttermost,
till we can sin no more.

Having our sins forgiven doesn't mean we can't do them all over again or do something worse later or something hopefully "less worse." But trying to do better is our goal, to "go and sin no more" (Jesus). But we still have questions and wrestle with things about what we should do or shouldn't do and everything. But in the moment, let's just say in the moment, from the moment we receive that assurance in our hearts by the Spirit that our sins are forgiven until the next time we do something wrong, which might be pretty quick. But no matter how quick it is, there's a whole space to that. There's a moment that we have been cleansed. So why not get those moments frequently through the day?

And then John said, "Who takes away the sin of the world." A lot of times when we're talking about confession and forgiveness and all that, a lot of times our mind tends to -- religious people's minds do this -- tend not to confess our own sins but each other's sins. That's not what it's saying, confess each other's sins and the Lord will forgive. Confess your own sins. "Go take the log out of your own eye before you try to take a little splinter out of somebody else's" (Jesus).  It's not about confessing other people's sins. It's about confessing our own.

When you think about it, the sins of the world, the most serious sins of the world are the ones where things that we wouldn't think of doing ourselves as individuals but we are a part of an organization or a government or a nation or something that puts it into law, makes it a part of the way that organization operates, the way that system runs that causes hurt to people, causes some of the gravest concerns that we have, suffering, war, and poverty and oppression and discrimination.

On and on that kind of a list could go that are corporate sins that we might not want to do ourselves but yet we can be a part of that. We don't really have a lot of control over it. Most people don't have even a vote or a voice in many of the matters that we're a part of. But we do have a little bit. We have a great amount that we can confess it ourselves and look at our role in it and see if there's anything we can do about our own personal role and that kind of thing and make what kind of stance we can, use our voice, use our prayers, use our whatever capacity we have, our vote or whatever that we do have. That's the part, I think, we're accountable for, not accountable for how other people vote but on how we vote. Not accountable for what other people stand up for or stand against, but what we stand for and we stand against, what we pray for and what we pray against.

We can all pray. If we are people of faith then that's part of our faith is that we believe that God will take those prayers, use them in many ways that we can't even imagine. But one of those ways is to open our own path to where we can maybe take another step after that, step into. When Jesus talked about the final judgment, He provided an image for the final judgment that really most other places in the Bible don't provide. His was a judgment of the nations and He said that the Son of Man will come in all His glory with all the angels and divide everybody up into two groups according to how they treated Him and each other (Matthew 25). That list that He gave the nations, He said this was the nations, which includes the people in them, which includes us individually.

But in His teaching and example, Jesus pulls us out of just thinking about sin as individuals and just what we're able personally to do wrong, but what we do wrong together. A lot of times I think the emphasis goes to that individual part. We don't want to forget about that, but in the context of the fullness of humanity and our part in all the decisions and all the actions of humanity, do we have a part?

It's in the interest of institutions to want us to just think about personal sins, like if we said a bad word, how you dressed or wore your hair or something like that, keep everybody focused on that. Keep our mind off of the bigger picture, then we wouldn't be voting against whatever they're voting for or wouldn't be standing against things that we should be standing against because we're just thinking about our own personal spirituality.

When Jesus speaks of judgment of the nations, He brings that into full view. "Inasmuch as you have done unto the least of these, my brothers and sisters, you've done it unto me." Not just you personally, but you all as a congregation, as being a nation, as a religion, as humanity, nations and states and counties. What we do is all under the scrutiny. That's where God wants to take away our sin and for it to all recede, be pulled back, and be replaced by love and goodness and forgiveness and joy, peace, prosperity, all the things that God wants for us and for everyone.

So that's something for us to pray about, isn't it? "Behold, the Lamb of God, that taketh away the sin of the world. In the name of Jesus. Amen.