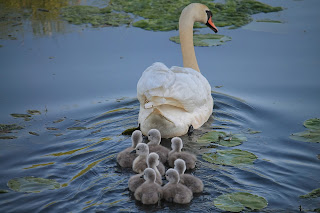 Let's learn to talk spiritual kin with everyone, so we can discover the connections that make us all sisters and brothers in the family of God.

"For whosoever shall do the will of God, the same is my brother and my sister and my mother."  (Mark 3:35 KJV)

This idea of us calling each other brother and sister and being of the members of the family of God does not replace our biological families, but adds to it. As we see here, Jesus didn't mean to say that, or he didn't say, and we don't need to take it as though he did, but to make it a little more clear, that his biological family, his mother and his other family members were no longer his family, but that in addition to that, so was all the other people. So were the others. We are an extended family and we feel that often in the church, don't we? We think of our spiritual family, our church family, and we grow close to each other and we love one another. Some of our best friends are blood kin, and some of our closest brothers and sisters are our spiritual kin. So it's all meant to expand our understanding of what it is to be family and the family of God.

I think one of the best demonstrations or backups of that idea we find at the cross where Jesus brought together one of his disciples and his mother, and made that an eternal relationship that became representative, not only of those two individuals, one, his birth mother and the other his spiritual friend, but of all of us in the church that we are all kin together. So it says, "Whoever does the will of God," that's how the passage ended in the gospel reading. "Whoever does the will of God is my brother and sister and mother."

God's will is stated in a lot of different ways throughout the scripture, but it's pretty much summed up as the Bible says, although all the law can be summed up, or all with God's will can be summed up in this one word, namely, that we love one another. That was the commandment of Jesus, that we love one another as Christ has loved us. If we do that, then we're doing the will of God, and everyone who loves is doing the will of God. And a lot like the prodigal son, sometimes we may stray, but that we're still the children of God. We're just aren't enjoying the feelings and the benefits and everything of it because we've turned away from it. But when we are restored in our love for one another, when we turn back to God, then God is always there like the prodigal father with open arms ready to receive us.

The LORD will fulfill his purpose for me; your steadfast love, O LORD, endures forever. Do not forsake the work of your hands. (Psalm 138:8 RSV)

So the Psalmist says in the Revised Standard, "The Lord will fulfill his purpose for me. Your steadfast love of the Lord endures forever. Do not forsake the work of your hands." We say in our communion ritual in just a few minutes, that even when we have rebelled against God's love, God's love for us has remained steadfast. That's just how it is. God loves us, and there's nothing we can do to undo that. There's nothing we can do to change that. There's nothing we can do to make it happen because it's already there and nothing we can do to stop it. His love endures forever, and his purpose is within that love. His purpose is that all of us would be in that relationship with God and with each other as a family for all of eternity. The promise of the Psalmist that's repeated in many other ways in the scripture is that the Lord will fulfill that purpose that he has for us. So we praise him and we want to be a part of that fulfillment. We are privileged to be part of the work, even though our part may be really small, it's a privilege just to be a part of it and to enjoy the progress as it's made toward the reconciliation of all of humanity.

They heard the sound of the LORD God walking in the garden at the time of the evening breeze, and the man and his wife hid themselves from the presence of the LORD God among the trees of the garden. (Genesis 3:8-15 RSV)

In the creation story, it kind of picks up in the narrative where they heard the sound of the Lord walking, as we say in the King James, in the cool of the day. Then it points us to that God wants to be companions with us. That's brought out, again, throughout all the scriptures if we follow that thread. A lot of times we might forget that and think that there's some other thing going on here. There are a lot of things going on, but it's within that context of God's love for us. God wants to be companions with us, friends, and to hang out together and spend time, and he wants to be with us in the car, and in the house, and in the church, and in the yard, or wherever we go. God wants to be a part of that, and a sharing of the... Not to just to boss us around or get on our case about how we're doing things, or how we're not doing and everything like that, but because God loves us. He wants to be companions and walk with us as the song In The Garden tells us, how to walk in the garden. He wants to walk with us in the cool of the day.

But we sometimes are embarrassed or afraid of that because of our awareness of our disobedience. When Peter saw Jesus standing on the shore, then he was a little bit embarrassed. And other times that the apostles would say, well they're afraid because they just realized that they were not worthy of this relationship. But worthiness isn't in the equation from God's perspective. God knows our hearts. He knows our lives. He knows who we are, what we've been through, what we've put others through, and he loves us. He wants to be friends with us. That's what the forgiveness of sins is all about, that we know that God loves us, who we are, and works with us on the rest of it. So we're the children of God all the time, and so is everybody else. We need to find those connections and helping them make that connection.

My grandmother taught me how to talk kin. She believed that everybody in the whole world descended from Adam and Eve, and so that we're all family she said. We're all members of the family. She was on a mission to find out how we were kin with everybody she met. And she'd ask who they were. Well, then the next thing would be, well were they from there? Well, I know somebody over here and they're my third cousin or my 10th cousin or something like that. So that became something that she kind of instilled within me, not to the degree that she carried on. But she not only did that, but she made her mission also to go visit all the family. So she was all over the place visiting and traveling and meeting everybody, and finding out how we were kin. She was pretty good at figuring it out, too. If she didn't know, she knew it was in there somewhere and it'd get figured out somewhere.

But yesterday at Hugh Barksdale's funeral, I mentioned that a few years ago his wife Marilyn and I had compared some notes to confirm that Hugh and I were seventh cousins. We had descended from a common ancestor, a clergyman, William Barksdale and his wife Mary Adams that were both born back in 1629. So I said, (and much to Hugh's consternation because he teased me about that all the time, "Oh no, no, no. I'm not related to you)." But anyway. But I said that a long time before we knew we were cousins, seventh cousins, a long time before we knew we were cousins, we knew we were brothers. Brothers in Christ. I think that's important for us to recognize each other in that way. A lot of times people have, especially when we were at all younger, I guess, it was more common that in churches everybody called each other brother and sister, but we still kind of do that. It's important, though, whether we call each other that, that we treat each other that way, brothers and sisters, and carry that and extend that out to the people around us in the world.

Yes, everything is for your sake, so that grace, as it extends to more and more people, may increase thanksgiving, to the glory of God.  (2 Corinthians 4:15 RSV)

And looking at those who sat around him, he said, "Here are my mother and my brothers! (Mark 3:34 RSV)

So finally, in the gospel reading, again, in verse 34 it said, "And looking at those who sat around him, he said, 'Here are my mother and my brothers.'" And again, he did not mean to exclude anybody as some churches like to do. Some places you go, they believe... Well, I don't go there, but some places that there are, some cults and everything that believes that you should get rid of all your biological relationships when you become a member of their church. But we don't believe in that, and that's not what Jesus was talking about here. He wasn't saying that those family members should go away because these are his family now. But instead, that in addition, those people at the door that were of his blood kin, there also were these people sitting under his feet listening to him, and sharing and fellowship with him. They were also his kin, and we are also his kin. So we don't exclude anybody from the family. We're supposed to include each other and everybody else in the family of God, extend that relationship wherever we can, extend our love and God's love to every person around us, and find some way to talk kin with them, spiritual kin, and find out where they can make that connection, where we can make that connection to where we can call them brother and sister in Christ.