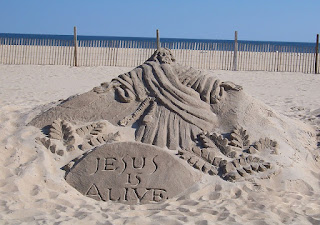 He is not here; he has been raised. Remember what he said to you while he was in Galilee.(Luke 24:6 GNT)

We celebrate the resurrection today. It's really the high point of the Christian calendar. We celebrate that Christ rose from the dead because it's such a wonderful victory. It's a victory over the greatest threat that we face. It's a victory in not just our physical existence, but in our spiritual existence as well. It shows that because he is alive, we are alive. Because he is alive forever, we have also that eternal life in us, and because of him and through him and with him, a life of heaven.

And so that is a big celebration right there. The Bible accounts describe many different ways in which Jesus appeared to friends of his over the next forty days before he ascended into heaven, sometimes even in different forms. Sometimes in ways that they wouldn't have recognized him until a certain, maybe he said something in one place or broke the bread in another.

But it's also that celebration of his victory of his way of thinking, of his approach to life and to the commandments and to religion and spirituality. It's a victory for his teachings. Because it affirms the things that he said as being true, and especially the most important commandment that he gave, that we should love one another as Christ has loved us and that we should not judge. This is how he lived his life, all the way through and even on the cross he said, "Father, forgive them." When it looked like it was the end, it was really just the beginning. And so that's a good message for us to celebrate in our lives.

Even his apocalyptic preaching that he did, he would say, "When all these terrible things that are going to happen before the end, they're going to happen, but it's still not the end." The Apostle Peter wrote that when we lay aside this earthly tabernacle, we have another, a house not made with hands, eternal in the heavens. What a wonderful piece of news to hang on to, what a wonderful Gospel to hang on to. As long as we're following Christ, we're not going to come to an ending. But only to new beginnings.

Things do change. Everything in life changes, but we don't think of that as the end when we live by faith. We think of it as the beginning, another new beginning. A transformation, a metamorphosis like what we see in the spring when the flowers start blooming and the trees bud and the grass turns green again, that's a message about us and about eternal life that Christ invites us to be a part of.

When Jesus, at the beginning of his ministry met with Nicodemus, he talked with him about Heaven and about being born again, about this newness of life. When Jesus was talking to Nicodemus, he said that we must be born again. And he spoke about that change that we need to go through, which becomes, as we've discovered, especially as we walk along this heavenly highway, it is not just a one time thing, but it's something that happens day by day as we continue to be transformed. One of our hymns says,

"Changed from glory into glory,
till in the heaven we take our place."

It's a whole pathway that Christ has opened for us. A life of love and change, forgiving the past and embracing the future. And we're all invited to be a part of that. And not only us, but everyone else, too. We extend that invitation to everyone around us and it's our blessing and privilege to find ways to do that. Usually not with words, oftentimes just with our own friendliness and our own handshake and acceptance and a smile on our face and the look in our eye when we genuinely love the people around us and love them into the kingdom into which we have been loved.

So in this same conversation with Nicodemus, Jesus went on to say how the serpent was lifted up in the wilderness back in the days of the Exodus, so must the Son of man be lifted up so that whosoever believeth in him should not perish but have eternal life. And he was foretelling what would be happening down the road in his own crucifixion where again he continued to love and forgive the people, even the people who were torturing him to death on the cross.


"For God so loved the world
that he gave his only begotten Son
that whosoever believeth in him
should not perish but have everlasting life." (John 3:16)

And then he goes on to the next verse and Jesus said, "For God did not send his Son into the world to condemn the world, but that the world through him might be saved." Jesus didn't come to condemn anybody, but to save everybody. Now, some people might say, "Well, that's a new way of looking at things." Well, it's not very new because it's in the Bible and it's 2,000 years ago and it's the first thing Jesus said when he was talking to Nicodemus. That he did not come to condemn the world, but to save the world. To give us that life, to bring us into life.

And whenever he was asked about, "Well, how many times do I need to forgive somebody? About seven times?" And he said, "No, seventy times seven." Just continue, that's a whole lifestyle, that's a whole bearing and attitude that we have in life. It's an attitude where we don't judge anybody, but we love everybody. As followers of Jesus, our job is to love everybody. That's his commandment. "By this, everybody will know that you're my disciple, if you love one another as I have loved you." That's our calling, that's our vocation, that's our job, that's our privilege in life to get rid of the whole burden and love everybody, even our enemies.

And can it be that I should gain
an interest in the Savior's blood?
Died he for me, who caused His pain?
For me, who him to death pursued?
Amazing love! How can it be,
that Thou, my God, shouldst die for me?

No condemnation now I dread;
Jesus, and all in him, is mine!
Alive in him, my living head,
and clothed in righteousness divine,
bold I approach the eternal throne,
and claim the crown, through Christ my own.

We're invited to Heaven. We're invited to that spiritual place where love is perfect. Where there is no hurt, no sin, no sorrow, no death, no pain, no suffering. Only peace, only love, only everybody caring about each other and encouraging and supporting each other.

In terms of the physical location, it's everywhere. Paul told the philosophers on Mars Hill, "God is not far from any of us. For in him we live and move and have our being." Wherever God is, heaven is there. And wherever we are, God is there with us. And heaven and all that is in Christ, that's why we're invited to live by the Spirit and not by the flesh. He's right there in our hearts, he's as close to us as our own breath. He's right here in this very place.

As the Psalmist said, you go to the top of the mountain, down to the lowest depths of the earth, go out into outer space, wherever you might go, God is right there. And all we have to do is turn to him when we think of him and we're in communion with him. Then that extends then to everybody else in Christ, each other in this realm, when we come together or whether we go apart, whether we're here on earth or whether we're there in heaven, we're all together in the Spirit.

Every year we celebrate the Transfiguration when Peter, James, and John went with Jesus up into the mountain to pray and there Elijah and Moses, who had both lived hundreds of years before at different times themselves, and the voice of God spoke to them. And there they all were, all together in one place. And here we are all together in one place.

We're invited to join Christ in the spiritual dimensions of heaven and it may seem like it's a long way off, but it's only a long way off in our thoughts and in our feelings. And if we need to be on that journey because every day that we are following Christ a little more closely is a day that we're a little closer to heaven. Christ wants us all to enjoy heaven as fully as we can on earth and in its fullness and completion and glory.

We have a song about that too that I'd like to close with this morning, another song by Charles Wesley and think about it as we celebrate the sacrament, think about the closeness of our God and our Savior, Jesus, who is alive and our family and friends that are alive in him that have gone on before us. And others that we love around the world, wherever they may be. As we reflect on the words of this hymn.

The Church triumphant in thy love,
their mighty joys we know;
they sing the Lamb in hymns above,
and we in hymns below.

Thee in thy glorious realm they praise,
and bow before thy throne;
we in the kingdom of thy grace:
the kingdoms are but one.

The holy to the holiest leads,
from hence our spirits rise,
and he that in thy statutes treads
shall meet thee in the skies.

Transcript of the audio for the sermon preached extemporaneously
at Briensburg UMC on April 21, 2019.
Posted by Bill Lawson at 11:03 PM